This San Sha practice group has been the personal care and guidance of Shanlu Zhu, Secretary of the Party committee of Peking University from the beginning of the formation. At the same time, it is also one of the most important teams and the strongest team among more than 300 social practice groups organized by Peking University this summer. The practice group was led by Ning Feng, assistant secretaries of the school league committee and Shaoyan Mou, Director of the office of the president of the Institute of Ocean Research, Peking Univeristy. Ya Wen Zhang, part time professor of the Institute of Ocean Research, Yang Xu, Bo Hu, and 21 outstanding students participated in the investigation.

In these 7 days, they had thematic surveys from construction of grass-roots organization, comprehensive law enforcement work, town planning management,and the production and life of the fishermen of San Sha, and then rapidly formed the research report and achieved preliminary results. The youngest prefecture level city in the country-San Sha ushered the first social practice group of domestic colleges and Universities. For the first actual contact between San Sha that just turned two year old and Peking University, teachers and students of Peking University are touched and infected by San Sha's spirit and San Sha are offered advice and suggestions.

"SanShatrip makesme very shocked", said Junqin Fang, a member of the practice group and doctoral student in tectonic geology. Although only a few days in the area, but he already confirmed his intention to San Sha work. He hoped that the next year, after graduating, he can work in San Sha and dedicated his youth to this“blue land”.

"It is the primting left by Sansha", said a member of the group, pointing to the obvious tanning complexion. Although the high temperature, high humidity, high radiation, high salt, sea sickness made them not comfortable for the first time to Sansha, but they overcame difficulties and successfully completed all projects.

During these days, based on 4 subjects, 27 members were divided into 4 groups. They went deep into the reefs and sea area such as Yongxing Island, Drummond Island, Observation Bank, Yagong Island, Zhao Shudao islands and Ganquan Island, and visit the fishermen, the cadres, and workers of Sansha.

With the deepening understanding of Sansha, teachers and students’professional ability gradually played out. In the investigation, practice groups put forward the corresponding thinking and exploration and gave a nearly 4 thousand words survey report within about 3days for problems such as grass-roots political organization existing manpower gap, the bottleneck of developing party members in the region with poor population mobility, the infrastructure construction weakness of Drummond Island.

“Comparied with the fisheries development of domestic same industry and foreign same region, we find that there is a great developmental space for Sansha fishery”, said Hao Li, undergraduate of Foreign language college. They recommended the formulation of the corresponding industrial policy, establishment of a cooperative, building a brand, and promotion of the development of Sansha fishery modernization in order to better serve the fishermen to increase their income and maintain the national marine rights and interests.

A baptism of Sansha's spirit:

“The process of social practice in Sansha is a baptism of Sansha's spirit as well”came from summary report. The deepest feeling of members was about Sansha’s spirit of no fear for hardship and hardwork.

“In these days, Sansha's change undergoes everyday, I can experience that speed", said Junqin Fang. Within a few days, the members of the practice group went through the establishment of Ganquan community neighborhood committee and the Yongxing Working Committee, and saw the new residence committees and Settlement of fishermen. The construction of infrastructure is changing with each passing day. Just two years, Shasha has made such a big success.

No matter how hard the conditions are, everyone is full of energy and everyone is a doer. Longfei Pan, PhD in the Department of Philosophy and other members worked and lived together with staff of the grass-roots political organization and fishermenin Drummond Island. Everyone is impressed with group members. The spirit is worth learning for students of Peking University.

Yawen Zhang, part time professor of the Institute of Ocean Research and professor of chemistry and Molecular Engineering, summed his feeling up in those words“Rooted in waters; Be brave to take on; Pay attention to the interests of the whole; Repay the country with supreme loyalty-patriotism”. Thanks to Sansha and Hainan Province, they let all the teachers and students receive a patriotic education, whip us to work better in our respective positions, and do more contribution to Sansha. 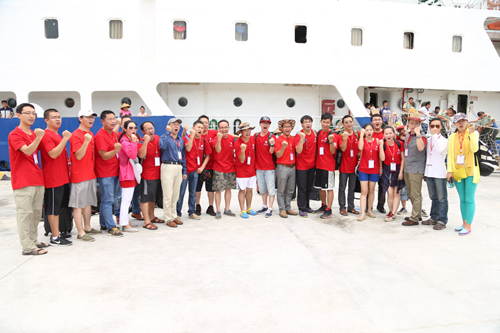 All participants cheer up for Hainan